From Postcard to Quilt in 2000 easy steps 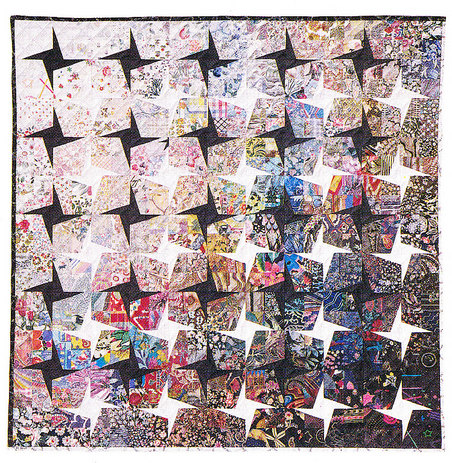 From Postcard to Quilt in 2000 easy steps

About 15 years ago I went to see the Quilt Art exhibition at Bankfield Museum, Halifax.  I bought a postcard as a momento of this visit.  Since then it was been in a frame on my wall until I was inspired by to get it out of its frame and make it.

There was no information on the card as to who had make it, its size etc. From the postcard I could see there were 11 rows, each row containing 11 blocks which gives a total of 121 blocks. Each block is made up of 4 different fabrics; so that meant I needed almost 484 different fabrics.  Some of the fabrics could be used twice.

I spent about 10 hours experimenting with the block structure and decided that starting with squares of 3¾" would make the quilt a reasonable size.  I did think I would use black and red as the accent fabrics but in the end I stayed with black and white as these would create a good contrast with the other fabrics.

Lucky for me I have accumulated a large stash of fabrics over the 20 years I have been quilting.  So out they all came and 3¾" squares were cut until I had at least 484.  As I cut out the darker fabrics I had to nip out and buy some more fabric.  Such is quilting, one never has enough fabric.

I spent the best part of a day laying out the fabrics into groups of 4 on the lounge floor.  Once I was satisfied with the selection of fabrics in each block I pinned an individual number to each set of fabrics so I would always know where a block was to go in the final quilt.  Oh my aching back and knees!

Next step was quite easy, sewing the 4 squares for each block into two sets of two and then joining them to make a set of 4.

Next I cut 50 black rectangles and 50 white rectangles which were each sub-cut diagonally to give me 100 triangles of each colour.

Before I continued I used the computer to plan all 121 blocks as some were to have a black triangle sewn on while others had a white one sewn on.  Only two blocks had no triangles sewn on.  I printed out the plan and then stared to pin the triangles to each block in the first row as planned.  Once pinned, I sewed them on.  I repeated this for the other 10 rows.

After a final check I cut off the surplus fabric below the black (or white triangle) for each row.  Then I could sew the required 11 blocks together for the first row.  I repeated this for the remaining 10 rows.  I then sewed row 1 to row 2, row 3 to row 4 and then joined these together so I had 4 rows sewn together.  This was spread out on the floor to check all was in order.  I then sewed row 5 to this set.  In a similar way I sewed row 6 to 7, 8 to 9 and 10 to 11; each set of 2 rows was sewn together so I had a set of 6 rows sewn together.

Backing fabric (a lovely Rose and Hubble from Croft Mill) was prepared and pinned to the lounge carpet, having first moved a lot of the furniture out of the way.  The wadding was laid out and finally the quilt top; the latter was also pinned to the carpet.  I then spent several hours sitting on the quilt, basting all the layers together.  I had to get it done before my husband came home as there was no room for him to walk in the lounge....  I finished at about 4.30 pm and was able to unpin it all from the lounge carpet. The next hour or so was spent folding over the surplus backing fabric to cover most of the black and white binding as I wished to protect the raw edges from fraying as I quilted the top.

I did not copy the quilting used on the postcard as I thought it was too fussy so I selected a cream quilting thread (so it would not be visible on the backing) and hand quilting about ¼" outside each star, a star taking about 25 minutes to do.  So 50 stars took me about 25 hours to do.  Once done I could remove the basting threads, trim the surplus backing and wadding back and then hand-slip stitch the binding down.

The quilt is best seen when it is hung, so I made a hanging sleeve from the surplus backing material and hand-stitched it in place.

I then bought a plain black metal curtain rod to thread through the sleeve so I could then hang it between 2 open doors!  Looking at it hung one can see all sorts of patterns appearing that are not visible when it is viewed laid out on the floor.

Would I make another one?  Ask me next year.